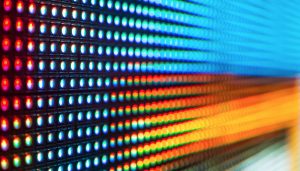 Back in 1997, I began working for an LED display manufacturer in the technical services division.  We were working on making a new state of the art outdoor LED display, the resolution at the time was stunning by standards of the day.  The LED clusters where on 50mm centers, and it did 16 bit color.  This was really innovative stuff at that time….

As part of my training, I learned how to solder and repair PCBs and replace bad diodes.  The repairs were carried out by hand and I could fix a board module in about 5 minutes on average.  Over the course of the next 10 years I watched the pixel density increased significantly as the costs fell.  50mm was a long extinct dinosaur in 2007.

It wasn’t long until the advent of outdoor surface mount diode displays made the process of doing hand repairs exceedingly difficult to the point that I was no longer qualified to work on hardware with such tight tolerances.  I too was now a dinosaur.

Fast forward another decade and I am stunned with the resolutions now achieved with both outdoor and indoor SMD LED technologies.  As diode manufacturers have managed to package LEDs into exceeding small form factors, I cannot help but wonder where the technology will be in another 10 years.  A recent 1.6mm LED project we completed with 1010 SMDs was truly stunning, I could not even believe that this was the natural progression of technology from the work I had done 20 years prior.

While I am doubtful I will still be actively working in R&D 20 years down the road, I can say that is such a wonderful experience to work with technology which has undergone such a transformative growth in such a short time span.